The Venice Lagoon is the largest wetland in the Mediterranean Basin, a long crescent of shallow water covering some 550 square kilometers, or 210 square miles, between the Italian mainland and the Adriatic Sea.
About a tenth of the lagoon is permanent open water or canal, as the network of dredged channels is called; another 80% consists of mud flats, tidal shallows, and salt marsh. The lagoon is dotted by hundreds of islands, some large and some small, some inhabited and some sparsely populated or not at all—all of them, though, jewels scattered across the wide expanse of shallow water.
The lagoon’s unique environment, forged over the ages by tide and current, plays host to significant bird populations, including breeding herons, more than 100,000 wintering water birds, and terns; large numbers of terns from all over the eastern Adriatic converge here after the breeding season, among them Europe’s largest concentrations of 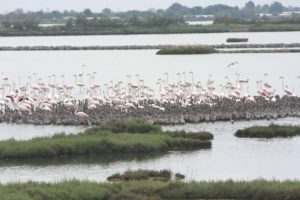